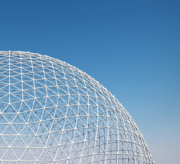 The objective of the World Game is to “Make the world work, for 100% of humanity, in the shortest possible time, through spontaneous cooperation, without ecological offense or the disadvantage of anyone.”

The World Game concept, conceived by Buckminster Fuller over fifty years ago, is reemerging as a potent organizing strategy to address the environmental and societal challenges of today. Originally, the World Game was going to be hosted at public universities with specialized computers, control rooms, and communication infrastructure. However, today, mobile technology, VR/AR visualizations, and global communications have freed the World Game from the halls of academia and placed it firmly in the streets and accessible to all.

This workshop will model and explore applying the World Game concept through public libraries. We will facilitate inquiry to:

Exploring our Interconnectedness – building a web through design science principles.

Participants will be actively engaged throughout the session and will explore provocative questions, drawing upon personal experience considered through Fuller design principles. New synapses will unlock innovative library service and experience responses.

Part 1 – Challenges.Small working groups will be assigned each design principle, and will be provided with a prompt focusing their design thinking on a hyperlocal issue from their home communities. Groups willl be guided on how to apply their principle to address these issues.

Part 2 – Connections.Utilizing hundreds of meters of yarn, participants will physically string together a web of connections between issues and/or principles, and identify eight intersections for further exploration.

Part 3 – Service/CX Responses. New participant groups will be guided through steps to imagine new library responses to apply the principles to address connected challenges. Concept report-outs will be graphically recorded.

David SCHNEE, Principal Architect + Planner, Group 4 Architecture, Research + Planning (South San Francisco, CA). David Schnee is a recognized leader in the planning and design of innovative, technology-oriented, sustainable, and beautiful public libraries. He has led the development of innovative, forward-thinking, and highly -implementable master plans for public library systems across the United States. David's experience in strategic planning and stakeholder participation has led to strong client and user group relationships and continued project success. David is also the design architect for many innovative public libraries, including revitalization of large main libraries as well as new and renovated branches large and small. David is one of the top public meeting facilitators in the San Francisco Bay Area and was chosen by City of San Francisco to lead the public outreach process for the design of the Harvey Milk Memorial Plaza. dschnee@g4arch.com

Andrew CHANSE, Executive Director of the Spokane Public Library serves on the Leadership Team for Excelerate Success, a collective impact initiative whose mission is to catalyze change around equity issues in Spokane County. He also serves on the Library Council for Washington State representing underserved populations. Previously, he was the Innovations and Strategies Administrator for the Maricopa County Library District in Arizona. Born and raised in northern New York, he lives in Spokane with his wife and four homeschooled children. achanse@spokanelibrary.org

Kirk BERGSTROM, President, WorldLink (San Francisco, CA, US)
Dr. Kirk Bergstrom is a recognized social entrepreneur who champions a planetary perspective and an ethic of regenerative design. For more than 25 years, he has led WorldLink’s media, education, and civic engagement initiatives that have reached millions of people in the US and internationally. As a media designer, Kirk has developed and produced award-winning public television, interactive multimedia, museum exhibits, and educational curricula. He directed the PBS special Nourish: Food + Community, which explores the possibilities of a sustainable food system, and a companion PBS program, Power Shift: Energy + Sustainability. Kirk served as senior designer of Interactive Earth, an innovative geospatial software tool for schools and science centers. He has spoken widely on the topic of Education for Sustainability, including presentations at the White House, Department of Education, National Science Foundation, and NOAA. For more than a decade, Kirk served as Vice Chair of the Buckminster Fuller Institute where he cultivated his passion for comprehensive thinking and design. kirk@goworldlink.org

Nate HILL, Executive Director of the Metropolitan New York Library Council (METRO) (New York, NY)
Nate Hill brings a depth of experience in library systems, customer experience, technical training, and participation in national and international library projects to his work as a consultant and as a non-profit, facilitating innovation and collaboration in over 250 libraries, archives, and other organizations in New York City and Westchester County. Nate has assisted library systems in the development of efficient, innovative, and inspiring library user experience (UX) plans. In April of 2017, Nate relaunched METRO in a new studio space in midtown Manhattan. The studio features facilities and tools to help knowledge workers from diverse backgrounds use digital media to produce, preserve, and promote cultural heritage resources and community stories. Prior to his return to New York City, Nate served as Deputy Director of the Chattanooga Public Library, where he led the 4th Floor project, a 12,000 square foot library loft space featuring a public access makerspace, civic laboratory, and gigabit laboratory.  Nate was named a “Mover and Shaker” by Library Journal in 2012. Nate has also worked as a web designer and developer for the San Jose Public Library, where he built a mobile local history app and participated in the planning of the Digital Public Library of America (DPLA). He began his library career at the Brooklyn Public Library, where he worked from 2000-2009. nathanielhill@gmail.com

You need to be a member of 2019 / WORLD GAME meets GLOBAL LIBRARIES to add comments!