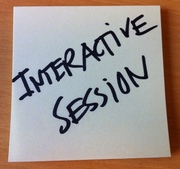 This session will begin with a general overview of the concept of Human Centered Design (HCD) and design thinking practices and will go on to highlight Chicago Public Library’s and Aarhus Public Library’s recent experience working in conjunction with IDEO, a design and innovation consulting firm. There will also be a facilitated activity around the HCD concept of the service journey. The activity will demonstrate simple ways of finding out and evaluating the highs and lows of a customer/patron’s service journey and the HCD process of designing tools or services based on this information.

Jason Driver is a Children’s Librarian at the Hall Branch Library in the historic Bronzeville community in Chicago, Illinois, where he has served children and young adults for the past 10 years.  For the past 9 months Jason has worked with a group of librarians on the Bill and Melinda Gates grant for Human Centered Design in libraries, focusing on the integration of play into library spaces. He has a passion for people and a zest for teaching and learning.  He holds a B.S. in Psychology from Illinois State University and M.S. in Library and Information Science from the University of Illinois.

Josh Farnum is a Children’s Librarian with the Chicago Public Library. He has been serving the families of West Garfield Park for 5 years and was recently published in the ILA Reporter alongside the photo of a rubber chicken. Josh is proud to have served on the indefatigable Team Play for the Human Centered Design project, and he only occasionally falls down on roller skates.

John Glynn is the Branch Manager for the Chicago Public Library’s Albany Park branch location. For the past year and a half, while his branch has been closed for the construction of a new building, he has been working in an administrative role in the Children’s Service Department. In the past year, he was given the opportunity to lead a team collaborating on a project focusing on Human Centered Design and Library Services funded by the Gates Foundation. The project was in collaboration with IDEO and the Aarhus Public library.

Melissa Kaszynski is the Branch Manager of the Chicago Public Library's Dunning Branch, a bustling and beautiful new library located on the Chicago's northwest side. She has a passion for programming for all ages and believes strongly in patron centered service. This past year she had the privilege to work on Team Play, a Human Centered Design project to investigate and ideate on play in libraries. At home you can find Melissa playing and reading with her amazing kids or watching old episodes of The Adventures of Sherlock Holmes.

Brandy Morrill is a Children's Librarian with Chicago Public Library, where she has served the amazing Chinatown community for the past 12 years. This year she had the privilege to participate in the Human Centered Design project with the 4 fantastic librarians of Team Play. ​When Brandy is not at the library, she is spending time with her family, her bike and her books.

You need to be a member of 2014 / Human Centered Design: Using the Service Journey to Improve Library Services to add comments!

Hello! I just wanted to make sure access to the presentation slides was available here.