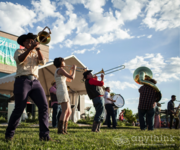 At Anythink, music constantly uplifts us, motivates us and helps us bring our community together. Using music as our inspiration, we’ll explain how a strong brand and vibrant culture can transform an organization – and how the two influence each other – set to an eclectic soundtrack. We’ll explore language, storytelling and core values that build culture and help shape an organization’s personality.
Outcomes: Participants will understand…
How core values influence brand and culture
How great brands evoke emotion and why that’s important
How a brand supports culture by creating a language and personality for an organization

Susan Dobbs is the Director of Human Resources for Anythink. She was integral to the library’s reinvention and shifting the culture to one that embraces change, creativity and disruption. She also leads the district’s staff appreciation task force, dubbed the Yellow Geckos, to support a culture of optimism and play at Anythink. Dobbs was also one of the organizers of R-Squared – The Risk & Reward Conference and its popular Culture Experience.

Stacie Ledden is the Director of Innovations and Brand Strategy at Anythink. After joining the district in 2008, Stacie assisted in launching the Anythink brand that in 2011 garnered the John Cotton Dana Award for Outstanding Public Relations in Libraries. In her position at Anythink, she has filled the role of event planner, webmaster, brand champion and Anythink cheerleader. In 2012, she helped launch R-Squared – The Risk & Reward Conference, which focused on creativity and taking smart risks to move libraries forward.

Slides from We Put the Fun in Funk Presentation

Thank you to everyone who attended our session! Here is the link to the slides:…Continue

You need to be a member of 2015 / We Put the “Fun” in Funk – The Intersection between Branding and Culture to add comments!